Relationships I miss, left behind in Michigan.

But there is another group of people I feel a lifelong bond with. I’m not sure how to classify them. They are truly special, but not family, and for the most part not “friends” exactly. Some of them are friends; our rapport has grown beyond that initial connection.

They are My Girls. A silly name, I know! Not only are they just a few years younger than me—grown women with children, some of which are teenagers!

How did we meet? The moment I graduated high school, I embarked on an eight-year coaching career. I coached the Canton Chiefettes Pompon Squad, a precision dance team.

It was a fluke that I ever got the job at such a young age, but sadly…no one wanted it. In fact, it was considered a “sponsorship;” all I was required to do was be in the vicinity for practices and help with administrative duties. But that’s not my style. If I’m involved, I’m involved. So I coached. I ran practice, drilled the routines, organized fund-raisers, and choreographed the competition routines. I cared about them.

The first year was tough. The seniors were only a year younger than me, and some of the girls, the returning team members, didn’t really trust me. You see, I came from the rival cross-campus squad. I was patient, did what I was there to do—help them improve their skills—and gradually, I earned their trust.

That first year at States we just missed placing (we came in sixth). We built on that year and the following season we were named the 1988 State Champs. When I took over this was a squad that had a different sponsor for at least the preceding three years. I stuck with them, I believed in them, and in turn, they believed in themselves. 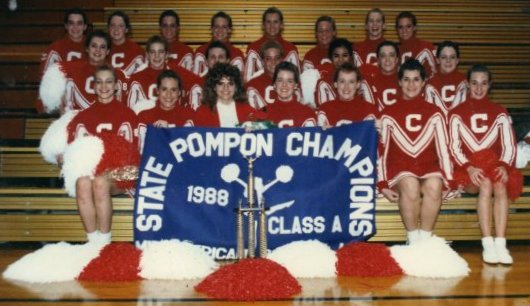 We went on to win two more state titles in 1990 and 1993, and placed in the top three for six years straight. We forged a bond. At the time I had no idea it would be a bond I would still cherish decades later, thanks to Facebook! (Facebook wasn’t even a glimmer in Zuckerberg’s eye in 1990, right?)

About eight years ago my brother advised me my presence was being requested on Facebook—My Girls wanted to reconnect. I’m so glad I heeded the call! For the most part, we go about our business, living our lives as the Chiefette Diaspora. But every once in a while we reconvene over a FB post!

It happened again this past weekend, and for me the timing was perfect. I was feeling a bit low, unsure of what was happening with a Boston friendship, but My Girls lifted me up!

My dear Kristen got a copy of that 1988 State Champion performance, and posted it. I hadn’t seen it in yeeears, but the best thing was the conversation that ensued! Shared memories for sure, but something more. I love interacting with them after all these years, but there’s something about seeing them interact with each other—many of them are still great friends, and I love that!

Every once in a while someone really opens up, and brings me to tears. This time around it was Kristen. She private messaged me (it’s not so private now, but she agreed!):

…You should be proud of not only those women you coached but also of yourself! It took so much time and effort and you did it because you loved it! I will be forever grateful for witnessing you do something because you loved it. That has led me to run PTOs, start dance programs, coach and start my current Pom/dance team. It is amazing what a positive impression you made on me personally— I thank you so much for that!

And…cue the tears! To hear this decades (yikes!) later, well really there are no words…not to adequately describe the pride I feel when I see the women My Girls have become. And to know that I had that kind of impact on even one life just floors me.

Coaching wasn’t just about winning for me. I took a personal interest in My Girls and tried to set a good example, be there for them when they needed me.

Now at 47, I don’t have children and won’t have any of my own, so maybe in a way this is a kind of maternal pride. (Yes, I am crying as I write this, but they are tears of joy! Don’t feel bad for me, I am childless by choice.)

So does this make My Girls family? Friends? Fr-amily? Nothing really fits. It’s just a warm, lasting, special bond: My Girls.